In a letter to the prime minister, the chairman of the UK Homecare Association said the adult social care system - which applies to those over the age of 18 - has begun to collapse.

The government said an extra £2bn is being invested in the system.

Those who provide care to people directly in their own homes, or in nursing homes, say a growing shortage of staff means people face receiving deteriorating levels of care. 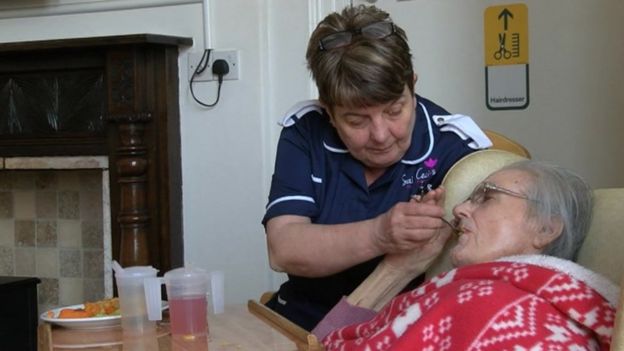 Sue Gregory, who has been a nurse in a care home for over 13 years, says staff shortages are making the job increasingly hard

"You just can't provide a consistent level of care if you have to keep recruiting new people", said Sue Gregory, who has been a care home nurse in North Yorkshire for 13 years.

"Its very simple, not many people want to do this kind of work, and this is a profession that relies on you getting to know the people you are looking after."

Data gathered by the charity Skills for Care, shows that in 2015-16 there were more than 1.3 million people employed in the adult social care sector in England.

Analysing the data, BBC News has found that:

The figures show that social care providers are struggling to retain their staff, with the industry having a staff turnover rate of 27% - nearly twice the average for other professions in the UK.

"This is not the job I'm going to be doing for the rest of my career" said 25 year old Trudi Hewitt, who works at a care home in Scarborough, North Yorkshire.

"I really care about the people I look after, but I just feel that the care sector is a dead end job".

"It's upsetting and disheartening when you find out that people earn more than you do in a supermarket just for stacking shelves." 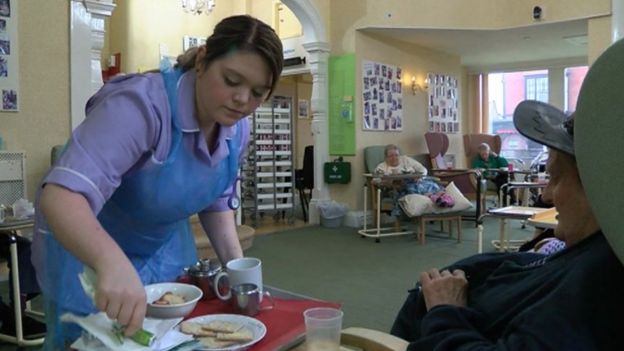 According to the latest figures there are around 84,000 vacant adult social care jobs in England

The government has recently committed to spending an extra £2bn on the social care system, and allowed local authorities to raise council tax bills in order to fund social care services.

The number of people aged over 75 is expected to double by the year 2040, according to the Office for National Statistics.

Those trying to provide social care services say without radical change, there will not be enough people to care for an ageing population.

In a letter to Prime Minister Theresa May, Mike Padgham, Chairman of the UK Homecare Association, said: "My biggest fear is that we will soon run out of capacity to provide care to those who cannot fund themselves.

"I agree wholeheartedly with Age UK's warning that the social care system will begin to collapse this year, but I would go further and say that the system has already begun to collapse." 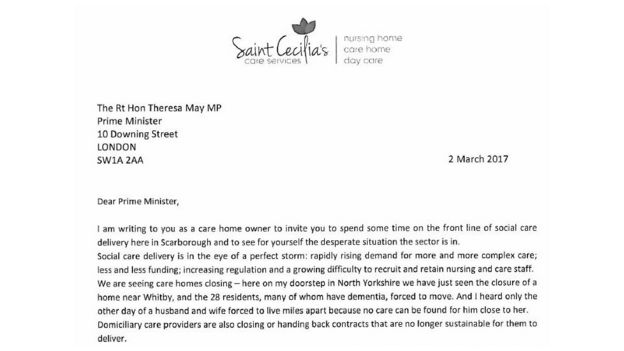 As chair of the UK Home Association, and an owner of a care home, Mike Padgham has written to the prime minister to warn of the pressures on the social care system.

Downing Street said it thanked Mr Padgham for his letter.

A Department of Health spokesperson said: "Social care jobs have increased at an average of 3 per cent a year since 2010, but we want to see improvements in turnover rates, with talented staff attracted to a robust sector backed by an additional £2bn over the next three years.